Taking On and Reducing Misunderstanding One Podcast at a Time

General discussion of my conversation with Ryan about Bias, starting with Ben Shapiro Show, teaching kids in the classroom, and is bias a good thing?

So, this part of the podcast has a visual component that can be found on the site: arhetoricaleducationpodcast.com.

It all started when I, in my attempts to engage in LR, Listening Rhetoric, sought to correct an assumption I had made about a conservative pundit and former Breitbart.com writer/editor Ben Shapiro. I had found fault with his bias and what, to me, appeared to be a distinct slant towards conservative mindset on topics and issues.

My friend Ryan, who is conservative, came back and pointed some assumptions I was making and rather than dismiss it, I decided to engage and listen to some episodes of the podcast the Ben Shapiro Show. Now, right off the bat, this show was not for me but I did try to give it a chance. It was not for me because I was not the audience it was trying to reach and I had quite a few quibbles and issues with Ben Shapiro’s bias as I saw it after listening to his show. However, I can come back to this later, for now, I want to focus on where that conversation between Ryan and me led.

After our conversation via Facebook and text I started to ponder bias and a visual metaphor came into my head. This is where the “visual” component of the podcast comes into play because I took it and created a visual narrative. 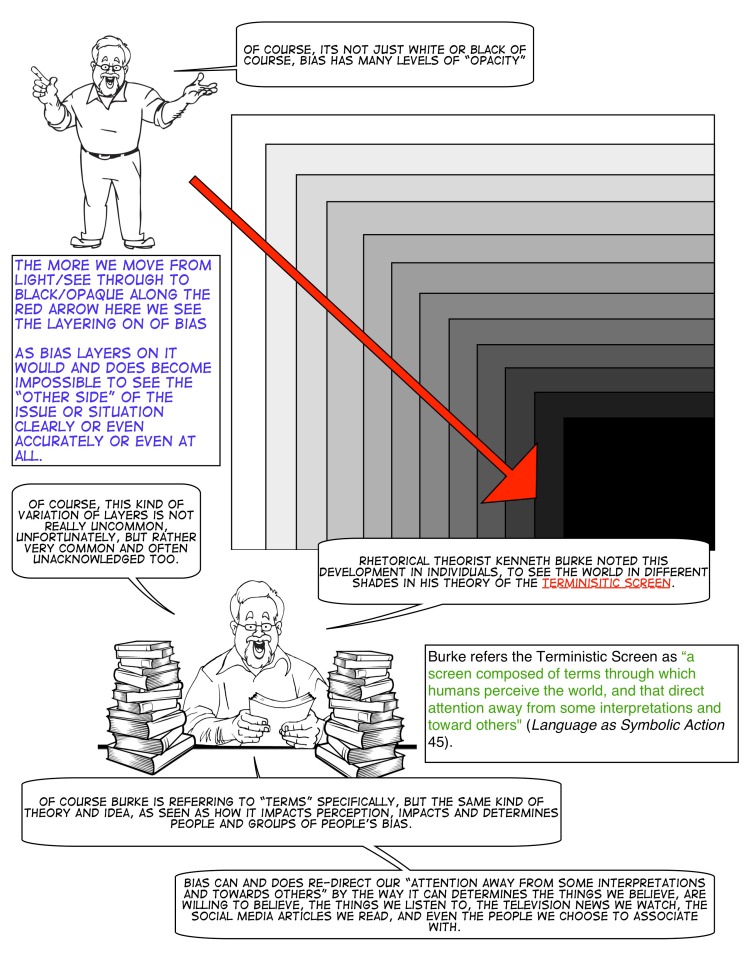 Now, getting back to Ben Shapiro. I feel that to get it off my chest I want to share the quibbles and issues I took with his podcast and a particular podcast in general. These things are part of why I was able to clearly determine I was not of his audience, but also led me to view his use of bias in a negative way.

Just in general I found Mr. Shapiro’s cadence to be off putting to me. I had encountered him earlier on an appearance on the Slate podcast Trumpcast and it didn’t jump out at me there, but on his own show it didn’t ring very well in my ears. That is really my main quibble of sorts.

Beyond that, and what really defined my realization of not being his audience and my issues with his bias, developed from listening to several episodes of his podcast. In particular there was a podcast recommended to me by friend Ryan entitled “ “ where Ryan had pointed out I might find common ground with Mr. Shapiro on criticism of some issues and then President-Elect Trump.

To keep this part short I want to list the things I was able to gather from listening that led me to a point where I realized that Mr. Shapiro’s show was of a bias that would not gel with me:

Now, I want to say real quickly that even though I personally disagree with Ben Shapiro, I do accept and realize he is a smart individual who has his own views and his own audience and what he wants to do is entirely his business. I don’t have a problem with that primarily because he doesn’t act in a manner or play the provocateur, he is simply treading his own path in the world and we are all entitled to that…he’s just making money so, you know, I’m jealous of that.

Okay, we’re done with that, now we should move on to some more bias, right?

So, I don’t think its any great secret that the Trump Administration is being quite open about its dislike for the media and reporters. This is of itself is not new, in fact I have been paying close attention to some retro-active closer examinations of how much the Obama administration hounded certain reporters, especially whistleblowers. I know that’s not a popular thing to say in liberal circles, but honestly, it is true and it was not right. I personally have come around to recognizing this kind of motivated reasoning or confirmation bias – the desire to believe good things about Obama and bad things about say George W. Bush or Donald Trump or wanting to believe certain things about topics, people, and issues I favor. Rather than continuing to give in to this trend, I want to chart a new course for myself and this podcast has been part of that endeavor.

However, even though I am “charting a new course” it doesn’t mean I plan on just accepting the Trump administration; especially its more open attacks on media and journalism, because that would make me a flip flopping hack. My new course is about charting my way towards a more critical self-awareness of ALL power and how those in power need to be kept in check regardless of my own pre-disposed bias. Doesn’t hurt to be suspicious and ask questions.

That being said, I usually love a good farce and the ridiculous, but not when someone or some group tries to prop it up for political advantage. I like it for humorous purposes, farce and the ridiculous that is, but in politics this nonsense deserves to be pointed out. That is what the press and journalists are supposed to do. Freedom of the press should be an issue we can all get behind, but the Trump administration, or at least its campaign arm, sees it as an enemy.

Well, let me go through it with you and point out a few things.

So, I go to the page, let’s look at the questions (you can too):

Now, its worth noting that this is my second time taking the survey because…well, I’m not cheating at a vote, but more importantly this is also a “re-launch” and second go of the survey. Why? Well, here is their answer: 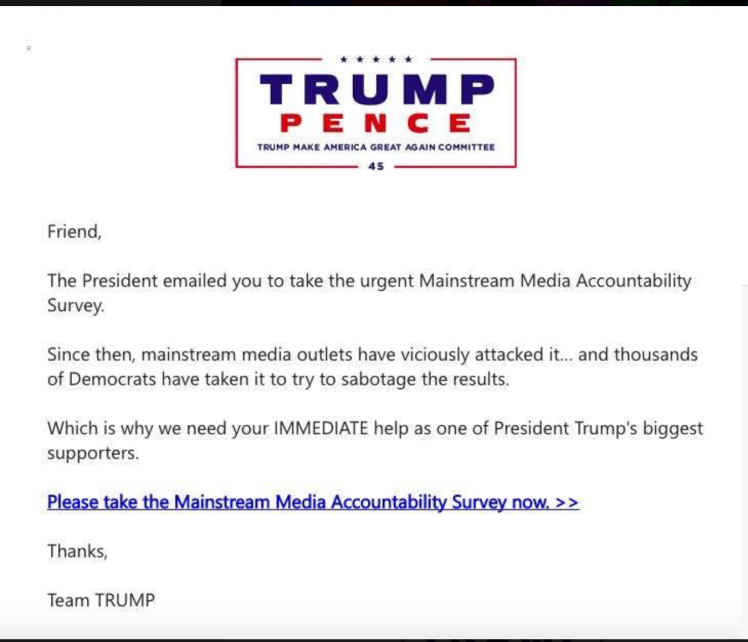 A cousin-in-law of mine recently shared a quotation from Sherlock Holmes, “It is a capital mistake to theorize before you have all the evidence. It biases the judgment.” If that doesn’t embody exactly what the Trump campaign is doing, I don’t know what is, but its worth noting, I don’t believe they ever wanted real “evidence,” they wanted to simply confirm their own views to engage in confirmation bias, silo-thinking, motivated reasoning…whatever you want to call it.

Talk about the Feb. 21 episode of The Gist.

It talked about how our brains are not equipped to deal with a constant stream of lies.

This came after a Donald Trump-like statement that had a few truths; some of half-truths, and a lot of lies contained in it.

It references a Harvard University professor who came up with a two-step model of reality processing:

Assault on our Cognitive load – too much going on and our brain can’t or doesn’t have time to process all of it, to verify it.

Rhetorical repetition is meant to persuade people, that’s what it’s used for. Persuasion is not truth. Persuasion is about probability and likelihood. I deal with rhetoric and I see it as a tool to help people to understand things, to communicate and listen, but there are others who use it, better to say use rhetrickery, to convince people of things that are not true.

Rhetrickery plays on people’s bias and tries to exploit it. I don’t think you should let it get away with that.

You can fight back by recognizing your bias and recognizing the bias in people around you but the first step comes from you. Make use of Listening Rhetoric, make use of Rhetoric as a tool to reduce misunderstanding in the world, and learn to really cut through the noise by learning how to ignore the nonsense, look deeper, and find out what is really going on.

In other words, Neo, take the red pill, not the blue pill.